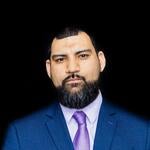 Devin Luqman started Luqman Law in 2018 to bring integrity, problem-solving, compassion, and modern technology-focused creative thinking that he would greatly improve the way the law works for its community. Since Luqman Law's founding, it has become one of the fastest-growing and best-reviewed Law Firms in the DMV region.

He served as an Assistant Public Defender in Maryland, receiving hundreds of favorable trial verdicts before both judge and jury. He then entered the arena of immigration law, and litigated numerous removal proceedings, family-based adjustment applications, and oversaw several cases regarding human resource compliance.

He has won cases before the Maryland Court of Special Appeals, the Board of Immigration Appeals, and appeals with United States Immigration and Citizenship Services.

He has appeared in the Baltimore Sun, The Frederick News Post, and on television in the TLC series 90 Day Fiancé: Happily Ever After?.

Mr. Luqman actively participates in his community. During his free time, he regularly speaks at local high schools, including Oakdale High School and Tuscarora High School. He also regularly lectures as a guest speaker at Hood College, speaking on current and emergent criminal law and immigration topics. He continues to serve citizens of all economic backgrounds by taking on a large number of pro bono cases.

Mr. Luqman recently teamed up with the Spanish Speaking Community of Maryland (SSCM) and the Ausherman Family Foundation to be the sole representative to immigrant families in Frederick, Maryland who are unable to afford legal representation. The rewarding partnership with SSCM has helped many families obtain representation they are unable to otherwise afford.

Find Out How We Can Help

Tell us a little about your situation and we will contact you shortly. Please be as specific as you can about immigration requests, and please try to leave a case number for us, as well as any possible upcoming trial dates. Thank you!

Please complete all required fields below.